It was only a matter of weeks after nominating Moonah’s Red Jaffa as the best blue collar burger in town that I dropped by for another burger fix, only to be greeted by a couple of very long faces.

While business had undoubtedly been up, someone had left a rather disparaging review on Urbanspoon claiming, and I quote:

“The value’s not bad, it’s quick and cheap, but best burgers in Hobart? Ummm… is this a joke?? For 30 cents more, get the chicken burger around the corner at Darcy’s (Hopkins Street) – there’s just no comparison. Moral of the story – Avoid bain marie food! (Or ask for a fresh one to be made)”

Now let’s break this down…

“The value’s not bad” – Correct! The value is sensational at Red Jaffa.

“Avoid bain marie food” – Incorrect (in this case). When the burgers are as good as Red Jaffa’s, they fly out of the bain marie as fast as they get put in!

“Get the chicken burger from Darcy’s…there’s just no comparison” – Correct. Last time I checked, a chicken is not a cow! 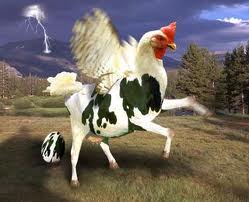 While the review had lost credibility, on the upside, it had brought to my attention another Moonah dining establishment to which I was previously unaware.

Darcy’s Cafe is in a funny little spot, about 20 metres down Hopkins St from its intersection with Main Road. I’m not sure how long they’ve been in business, but it was the first I’d heard of them after working nearly 10 years in the area (I do recall a fantastic cafe specialising in cheap home-cooked food (including a very moreish burger!) right on the corner back around 2004/05, but I’m pretty sure they weren’t related in any way to Darcy’s).

I’m always up for a lunch time burger, so I trundled down to see what they were offering.

Even when it’s staring you right in the face, it’s still a little nondescript isn’t it?

First impressions are often misleading though, and it proved to be the case in this instance! On stepping inside it was clear that Darcy’s was doing a very brisk trade.

The lovely couple behind the counter were buzzing around taking orders, occasionally ducking into the kitchen out the back, ferrying meals to the workers and chronologically advanced seated at the numerous small tables. It was pretty clear from the fantastic prices on the wall, and the accompanying variety of dishes on the menu, that the blue rinse set are of prime consideration at Darcy’s. Considering the suburban demographic, and the general level of hubbub, they’ve made a great decision!

I obviously wasn’t going to be ordering a chicken burger, so instead it was the $7.50 beef burger to takeaway.

As suggested by our esteemed burger connoisseur above, there weren’t any burgers in bain maries at Darcy’s. However, while I do appreciate a freshly cooked burger, to have to wait 15 minutes at lunchtime is really starting to push the friendship. Stevo’s at Glenorchy has shown that a sub 10 minute response time is easily achievable and I think this is the benchmark to which other cafes should be aspiring. Phoning ahead is obviously an option, but it’s still an unnecessary inconvenience in my books.

The burger itself though looked and smelled delicious!

Plenty of bacon, thick beef patty…what’s not to like?

As they say, sometimes less is more. The bacon was packed in there, but despite the time taken to prepare the burger, it was underdone and generally quite limp. There was none of that satisfying crunch that you get from a nicely fried piece of pig fat!

The cheese though was extremely good. Generous, and melted to the point that it had almost soaked into the bun!

Perhaps the biggest surprise packet though was the raw red onion. I’ve said it a number of times, I prefer my onions fried, but in this case it actually worked really well. Perhaps it was the lack of tomato, lettuce or pickles (a very odd choice by the chef) that made it work…I’m not sure, but it was the only counterpoint to the heavy combination of patty, bacon and cheese, and for that I was grateful.

The relish also was quite nice, adding a little bit of spice that wouldn’t have been provided by a typical bottle of tomato sauce.

If you can’t afford the extra couple of minutes to get yourself down to Red Jaffa, then Darcy’s may just hit the spot.

It’s a good burger, but one that feels only half-finished to me. Lacking fresh ingredients to balance out the heavier mainstays, it felt unbalanced and in need of refinement. It will certainly fill you up and is great value at $7.50, but as I have discovered, there are better options only minutes away in both Red Jaffa and Stevo’s.

Perhaps the chicken burger is better? I’ll leave that for another day.

*Can you stuff it in your face without a knife and fork?