It was an adventure getting there, but Bulguksa Temple in Gyeongju was one of our favourite things to do in this fascinating city. Keep reading to find out more!

After a great morning spent exploring the fantastic Tumuli Park in the middle of Gyeongju, we thought we’d make our way to one of the most popular attractions in town – Bulguksa Temple.

Our meanderings had already taken us to the entrance of Anapji Pond, however we didn’t enter as we were keen to come back to the pond later in the evening. Our next option was Bulguksa Temple, but how to get there?

Walk? Taxi? Bus? We’d noticed a number of large signs on the highway pointing to Bulguksa Temple, with the most recent one <cough>allegedly<cough> informing us that the temple was a mere 1.6km down the road.

Huzzah! That should be a cakewalk for these two intrepid explorers!

45 minutes of boring highway later, scorching summer sun beating down on our heads all the while, we managed to finally get a wifi signal strong enough to show us how far we’d actually walked. 2.5km apparently. Now I was positive that we hadn’t missed a turnoff, so I scrutinised Google Maps even more closely, only to find that the total distance to the temple was closer to 13km, not 1.6km!!

Time to find a bus.

Thankfully they travel that stretch of road fairly regularly and it wasn’t long before we were standing in airconditioned comfort for the remainder of the journey!

While it looks sensational, Bulguksa is also a working Buddhist temple that has been classified by the South Korean Government as the No. 1 Historic and Scenic Site in the nation. It has also been included on the UNESCO World Heritage List and is considered by many to be one of the best representations of architecture, and artistry, from the time of the Silla dynasty.

The entrance was similar to a number we had seen at other temples in Korea, but it was the gardens that really made an impact. Similar in some ways to those we encountered in Japan, yet perhaps without the same level of fastidiousness, these gardens were gorgeous.

Arched stone bridges spanning lotus ponds, pine trees jostling at the water’s edge with willow trees and flowering shrubs, giant carp weaving their way through the lotus stems, hoping for a tossed crumb. It was like we were standing in a Korean fairytale!

Unfortunately, but understandably, photography was prohibited inside the numerous halls within the sprawling Bulguksa complex.

In one of the halls we had the privilege of viewing a number of sarira. We hadn’t come across this term previously, but a sarira is a Buddhist relic, typically taking the form of a crystal bead-like object only a few millimetres wide and long. Believed to be the post-cremation remains of past Buddhist masters, these sarira at Bulguksa had recently been moved from the adjacent Three-storied Stone Pagoda that was undergoing renovations. To provide a better experience for visitors, they had also been placed under magnifying glasses so that you could see a little more detail of these tiny relics.

The buildings were incredible, the gardens peaceful and even the souvenir shop seemed to offer a number of products we hadn’t seen elsewhere.

Bulguksa Temple isn’t far outside Gyeongju, so there isn’t really any excuse as to why you wouldn’t take the time to experience this ancient wonder!

For those wanting to spend a little longer in the area, there is also a trail linking Bulguksa with the Seokgurum Grotto further up the mountain range. As the grotto was undergoing renovations we didn’t bother with this option, but by all accounts it’s a great little walk with fantastic views up the valley. Google is your friend is you want some more info on that one!

Where is Bulguksa Temple in South Korea? 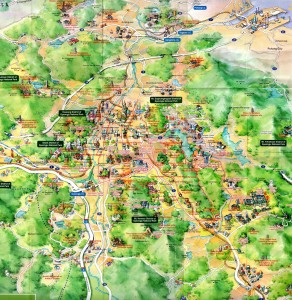 How to get to Bulguksa Temple?

Bulguksa Temple is approximately 13km south east of Gyeongju. There are numerous tours that will take you to Bulguksa Temple as part of a broader tour of the region, but if you’d like to have the flexibility of staying as long as you like then we recommend taking the local bus.

By bus: From the intercity or local bus terminals in town, take any of these buses and they will drop you off at the doorstep of Bulguksa (there will be an English announcement telling you when you are coming up to the correct stop); Bus #10, #11 and from memory we think you could take any of the #500 series EXCEPT #502. Check at the tourist information centre (located next door to the bus terminal) to confirm. Just be aware that on return, many (if not all) of the buses will take a loop route back to town, taking you through the resort area to the east of Gyeongju, and NOT back the way you came to the temple.

By bike: If you’re feeling like a bit of exercise, then riding a bike is also an option. Just be aware that while the first 10km is very flat, the last few kilometres from the main road up into the foothills is steep. There are wide footpaths all the way though, so you don’t have to worry about traffic.

How much does Bulguksa Temple cost?

How long does it take to explore Bulguksa Temple?

We spent around 45 minutes exploring the large complex. If these sites are of significant interest to you then I’d allow up to a couple of hours.