After an incredible morning of temple hopping we returned to the hotel to chill out for the rest of the afternoon.

So it was togs on and into the pool for some momentary respite from the muggy heat! Of course within 10 minutes the heavens opened up and dense sheets of warm rain bucketed down on us! I’m not sure the staff could get their heads around the fact that it was pouring down, and yet these two mad Aussies were still horsing around in the water!

After such an early start to the morning I was up for a cocktail or two to keep the energy levels up, so (silly me) I decided to try a Khmer Bull….

Red Bull, blue curucao and lime. I prefer to call it “Nasty”.

Next up was a complimentary leg massage.

Now I know why the ladies love their cucumbers so much!! 😀

In fact, it was so good that I unknowingly descended into that twilight zone between awake and sleep, with an involuntary little twitch bringing me back to the real world!! I’m sure I heard the masseuse give a little chuckle…! 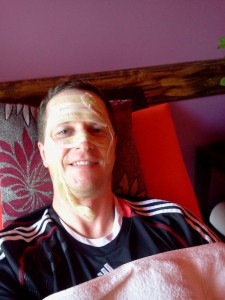 Before long it was dinner time!

The restaurant we had booked was another on our ‘must visit’ list, called Tangram Garden.

After a quick Google search it looked like it should be pretty easy to find. One street behind the hotel, turn left, and then it should be on the right hand side only a short walk away…

Oh no, no, no!! It’s never that easy when you’re in a foreign city….at night….in the rain….without street lights…without a map…

We started walking down what began as a nice wide street. Sure, there was the odd pothole or two rapidly filling with water, but this was Siem Reap, we weren’t expecting red carpet! The further we walked, the darker it got, and the deeper the water got, until eventually we could hardly see where we were placing each foot! Not knowing whether you were suddenly going to find yourself knee deep in mud wasn’t exactly what we were expecting! When we eventually reached the point at which the flooding had extended across the whole street (more of an alleyway at this point though, complete with the accompanying paranoia of not knowing what sorts of unsavoury characters could be lurking in the shadows!) we decided it was time to turn back and find a tuk tuk.

Only 5 minutes later Tangram Garden was a sight for sore eyes (and wet feet)!

Making fantastic use of the space available, the restaurant actually comprises a number of small pavilions, scattered throughout a massive garden. Unlike most restaurants where you’re shoulder to shoulder with other patrons, this spaciousness gave everyone a little bit of welcome privacy. Ready to order? Just switch on the light on the wall of your pavilion and watch the wait staff come running!

For Karen it was an apple and pomelo salad for entrée, while I had a beef and cucumber salad.

For the main course I went for a shrimp kebab with aioli, while Karen ordered the tilapia fillet (a local fish) with tamarind sauce.

For dessert? Dark chocolate ice cream for me. Mango and sticky rice for Karen!!

Overall the meal was pretty good. Karen’s tilapia fillet was particularly tasty, while my favourite was probably the ice cream of all things!!

It had been an absolutely epic day, and by the time we’d finished eating and grabbed a tuk tuk back to the hotel through the rain, we were totally wrecked!!